In this three-part series, we have taken a closer look at Amendment 1 and how Florida’s voters and the solar industry will be affected by it should it pass. If you missed the previous articles, you can find them here and here.

Today we are going to finish this series by examining net metering in more detail and why big utility companies back the plan to eradicate it.

The debate about net metering tends to revolve around whether or not net metering forces utility companies to raise their rates to cover any losses due to solar homes. Several studies have investigated the issue, and most show that net metering actually benefits non-solar homes as well as those opting for solar. A study commissioned by the Nevada Public Utility Commission in 2014 found that net metering provided nearly $36 million in benefits to all Nevada energy customers. A similar study in Mississippi found that solar energy homes can actually take the pressure off of the gas and oil industry during peak usage times which would lower rates. A 2015 study by the Maine Public Utility Commission concluded that solar power helps to reduce utility prices, reduce costs related to the electric grid, reduce the need for more power plants, stabilize prices, and promote energy security.

Why Electric Companies Back Amendment 1

While net metering may decrease the electric companies’ profit margins, it will have a minimal impact on the average household. That is why so many big utility companies are backing Amendment 1. By prohibiting net metering, Amendment 1 all but guarantees their monopoly on the energy market. This scenario unfolded earlier this year in Nevada. Due to pressure from a major utility company, state regulators rolled back crucial financial incentives for solar energy. In one fell swoop, the economic incentive for homeowners to switch to solar were obliterated, and it also prompted a mass exodus of solar contractors from the state, costing hundreds of people their jobs. Without solar, Nevada’s energy is now solely in the hands of big utility companies. The same thing could happen in the Sunshine State if Amendment 1 is passed. Florida has substantial potential for solar energy systems, more so than much of the rest of the country. Yet there are only around 12,000 solar homes compared to the roughly 9 million electric utility customers. If Amendment 1 passed, the potential for those homes to make the switch is all but dead in the water. That is good news for the utility companies and their shareholders, not so good news for alternative energy, consumers, or the environment.

Florida faces a crucial decision this November. Before heading to the voting booth, know the facts. Amendment 1 is a smokescreen for big utility companies to increase their control over the energy market in the Sunshine State. Where will you stand on November 8th?

Stand with solar. Stand for Florida. Vote no on Amendment 1. 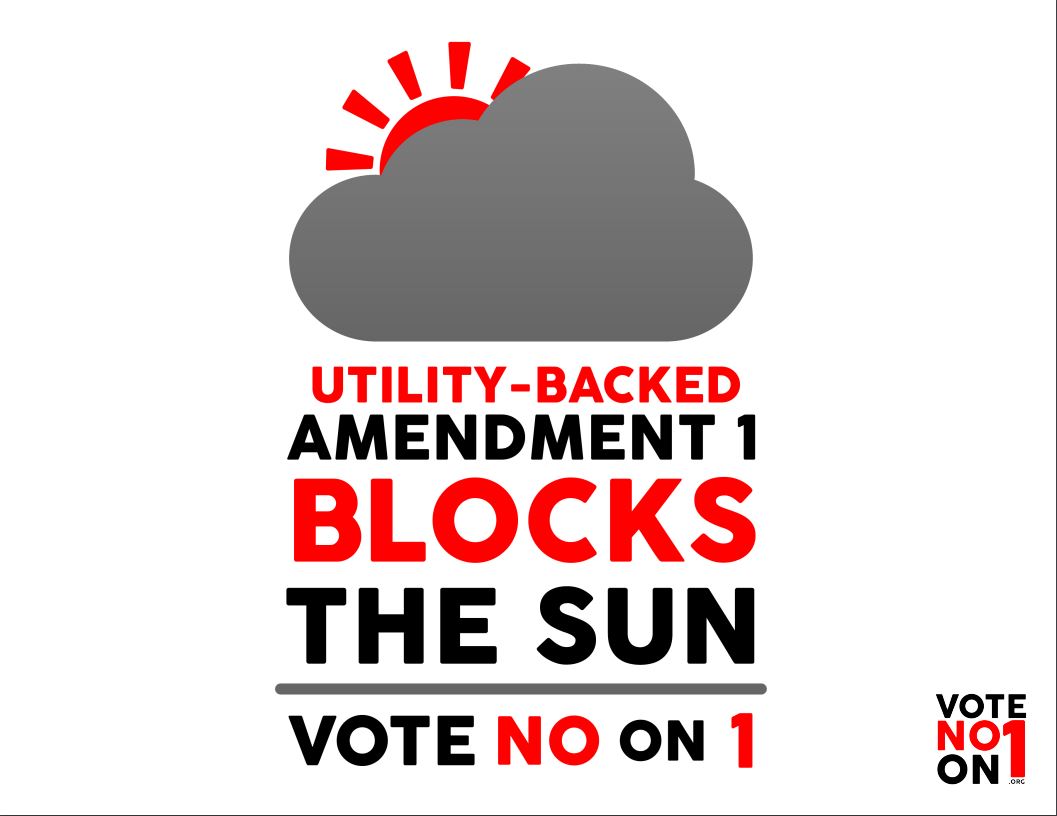